THE LITTLE MERMAID
Troupe 1096 Presents "The Little Mermaid"! The story follows the journey of a young mermaid who is willing to   give up her life in the sea to gain a human soul. In Disney's beguiling animated romp, rebellious 16-year-old mermaid Ariel is fascinated with life on land. On one of her visits to the surface, which are forbidden by her controlling father, King Triton, she falls for a human prince. Determined to be with her new love, Ariel makes a dangerous deal with the sea witch Ursula to become human for three days. But when plans go awry for the star-crossed lovers, the king must make the ultimate sacrifice for his daughter.
Dates: Nov 8th – Nov 22nd

TRAP
"Trap" by Stephen Gregg follows an incomprehensible event: every person in the audience of a high school play falls unconscious--every person but one. Using interviews with witnesses, loved ones, first responders, and the investigators pursuing the case, a theatre ensemble brings the story of the strange event to life, documentary-style. But as the strands weave together into an increasingly dangerous web, it becomes clear that this phenomenon might not be entirely in the past. Unnerving, exhilarating, and wildly inventive, you've never walked into anything quite like Trap.
Dates: Feb 28th – March 7th

A CHORUS LINE
Troupe 1096 Presents "A Chorus Line"! A Chorus Line is a concept musical with music by Marvin Hamlisch, lyrics by Edward Kleban and a book by James Kirkwood Jr. and Nicholas Dante. Centered on seventeen Broadway dancers auditioning for spots on a chorus line, the musical is set on the bare stage of a Broadway theatre during an audition for a musical.
Dates: May 1st – May 9th

Please join us for our annual fundraising event! Get your tickets in addition to your Patron Package above! 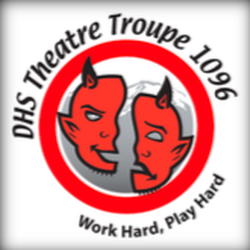 TROUPE 1096 GALA!
A benefit gala to raise funds, helping our amazing students be part of the 2020 International Thespian Convention. With an exquisite dinner, a silent auction, entertainment, and lots of smiling faces, come see the things that troupe 1096 has to offer!
Dates: One Night Only - April 11th
​